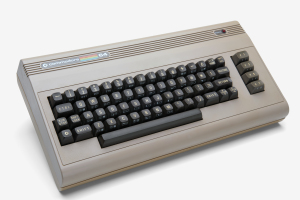 The Commodore 64, also known as the C64 or the CBM 64, is an 8-bit home computer introduced in January 1982 by Commodore International (first shown at the Consumer Electronics Show, in Las Vegas, January 7–10, 1982). It has been listed in the Guinness World Records as the highest-selling single computer model of all time, with independent estimates placing the number sold between 10 and 17 million units.
More...

Public Domain Disks for the Commodore 64.

Applications, Utilities and Tools for the Commodore 64.

Custom and hacked levels of the game Boulder Dash for Commodore 64.

To some, the heart of the Demoscene - the self-playing examples of programming and artistic prowess of the last 30 years on the underpowered but extremely flexible C64. These demos will play in the browser.

&nbsp;Barry Joynes&nbsp; aka “Derbyshire Ram” was one of the greatest and appreciated crackers on the c64 scene from the early days of the c64 commercial games , additionly&nbsp; he had many contacts worldwide , and considered Indisputably a real pioneer as a cracker , he gained a large comminuty of fans and mates who admire his work and his awesome personality.&nbsp;

A wide variety of educational (and "edutainment") titles for the Commodore 64, playable in the browser.

A wide variety of games and entertainment software for the Commodore 64, playable in the browser.

Shoot'Em-Up Construction Kit (a.k.a. SEUCK) is a game creation system for the Commodore 64, Amiga and Atari ST created by Sensible Software and published by Outlaw (part of Palace Software) in 1987. It allows the user to make simple shoot 'em ups by drawing sprites and backgrounds and editing attack patterns. The advertising promoted the Kit with the phrase "By the programmers of Wizball and Parallax". The Kit presents users with a series of menus for customising every aspect of the...

This is a large-scale collection of cracked software for the Commodore 64: Usually containing title screens and animations by crackers, as well as modifications or cheat menus for the programs inside. They're included to allow easy access to all the variations of C64 software released, although other collections in the C64 Software Library are better focused.

Commodore 64 compilation disks are sets of (usually cracked) games or programs meant to save download time by being placed together on the same floppy disk.

A collection of emulated-in-browser top-rated Commodore 64 games, demos and programs to enjoy and learn from the history of this important computer system. Misspellings to help searchers: commadore comodore

Commodore 64 Disk Magazines, self-contained executable issues with writings, sound and graphics, often put out monthly, and covering items of interest to various scenes. All should be executable in the browser.

Commodore 64 Music Disks - disks intended to play music with a possible jukebox interface, or simply play songs one after another. Some were ripped from games or programs and presented on their own to allow enjoyment without the games themselves.

Welcome to the most complete Commodore 64 cassette archive that exists. By complete, we do not mean it's all the titles ever made, but all tapes are complete with coverscans and manuals all in one place for you to enjoy. We have used Tape Manager V1.3 (https://csdb.dk/release/?id=172213) to organize the content, so that it can easily be used with the NOVA64 front end (https://csdb.dk/release/index.php?id=172356) which also has features to run the images on both emulators and real C64s. You are...

DESCRIPTION
The Commodore 64, also known as the C64 or the CBM 64, is an 8-bit home computer introduced in January 1982 by Commodore International (first shown at the Consumer Electronics Show, in Las Vegas, January 7–10, 1982). It has been listed in the Guinness World Records as the highest-selling single computer model of all time, with independent estimates placing the number sold between 10 and 17 million units.
Volume production started in early 1982, marketing in August for US$595 (equivalent to $1,509 in 2017). Preceded by the Commodore VIC-20 and Commodore PET, the C64 took its name from its 64 kilobytes (65,536 bytes) of RAM. With support for multicolor sprites and a custom chip for waveform generation, the C64 could create superior visuals and audio compared to systems without such custom hardware.
The C64 dominated the low-end computer market for most of the 1980s. For a substantial period (1983–1986), the C64 had between 30% and 40% share of the US market and two million units sold per year, outselling IBM PC compatibles, Apple computers, and the Atari 8-bit family of computers. Sam Tramiel, a later Atari president and the son of Commodore's founder, said in a 1989 interview, "When I was at Commodore we were building 400,000 C64s a month for a couple of years."
In the UK market, the C64 faced competition from the BBC Micro and the ZX Spectrum, but the C64 was still one of the two most popular computers in the UK.
Part of the Commodore 64's success was its sale in regular retail stores instead of only electronics or computer hobbyist specialty stores. Commodore produced many of its parts in-house to control costs, including custom integrated circuit chips from MOS Technology. It has been compared to the Ford Model T automobile for its role in bringing a new technology to middle-class households via creative and affordable mass-production. Approximately 10,000 commercial software titles have been made for the Commodore 64 including development tools, office productivity applications, and video games. C64 emulators allow anyone with a modern computer, or a compatible video game console, to run these programs today. The C64 is also credited with popularizing the computer demoscene and is still used today by some computer hobbyists.
In 2011, 17 years after it was taken off the market, research showed that brand recognition for the model was still at 87%.